While we usually don’t have an absolute certainty about the eternal fate of our loves ones (with the exception of those beatified and canonized by the Church), we should still hold out great hope for their salvation. For some, this is more difficult than others, often depending on the way their deceased loved one lived here on earth. Our God is a Father of mercy, of compassion, of doing all that He can to woo us toward Himself. How are you with this notion? Do you have a certain confidence that your loved ones are with the Lord (even if a little time in Purgatory occurs along the way)? Or, do you find yourself constantly worrying about their soul? It can be difficult losing someone we love dearly. But “letting go” and trusting that they are in the merciful arms of God can help to bring us peace of mind and heart. Share your take on this with Jerry and Debbie on Monday. 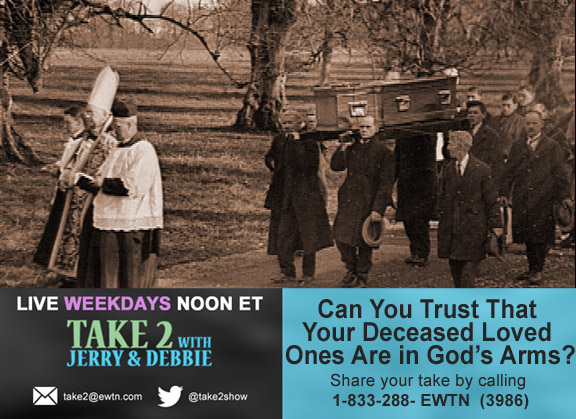 6 thoughts on “Do You Have Peace That a Deceased Loved One Is With God?”

Tuesday, September 21st – Is your Parish thriving or surviving

Wednesday, September 22nd – Have you ever saved a person’s life?

Thursday, September 23rd – Padre Pio, how he loved every soul!