Thursday is Cinco de Mayo. Wikipedia describes it this way:

Cinco de Mayo (pronounced: [ˈsiŋko ðe ˈmaʝo]; Spanish for “May 5th”, or literally, “Five of May”) is a celebration held on May 5. The date is observed to commemorate the Mexican Army’s unlikely victory over French forces at the Battle of Puebla on May 5, 1862, under the leadership of General Ignacio Zaragoza. In the United States, Cinco de Mayo is sometimes mistaken to be Mexico’s Independence Day—the most important national holiday in Mexico—which is celebrated on September 16.

If you celebrate Cinco de Mayo in any way, let us know about it. Share your take with Jerry and Debbie at Noon ET! 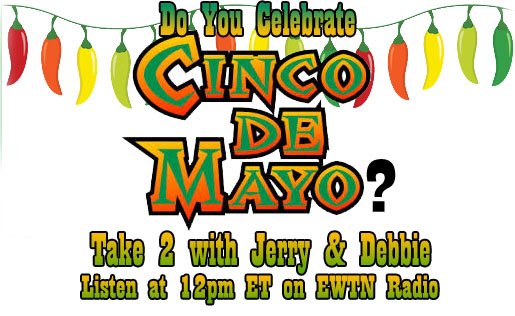 Hosts Jerry Usher and Debbie Georgianni create a welcoming on-air environment so that their listeners feel comfortable sharing with one another their take on the most important issues of daily life. Catholics helping Catholics! As a peer-to-peer ministry, it's social media for the ears!